New York has more licensed attorneys than any other jurisdiction in the United States, but an estimated 96% of them practice in or around the state’s urban centers –New York City, Buffalo, Rochester, Syracuse, Utica and Albany/Schenectady/Troy.

At the same time, 44 of New York’s 62 counties are classified as rural under state law. These rural areas offer a laid-back lifestyle with easy access to outdoor recreation and extraordinary scenery. As alluring as such amenities many be for some, they are not attracting young lawyers to live and practice in these communities.

NYSBA’s President, Hank Greenberg, formed the Rural Justice Task Force last year to look at this important issue and make recommendations for how to address it, and the task force report is being released this month. The annotated maps included here were created for the report and present a stark graphic reminder of the challenges New York faces in ensuring access to justice for New Yorkers in rural communities across the state.

The Government Law Center at Albany Law School published its Rural Law Practice in New York State Report in April 2019. This report surveyed rural practitioners and detailed the growing shortage of rural attorneys based on several indicators: rural attorneys have difficulty making referrals in their geographic region; they feel overwhelmed by the volume of cases they are handling, and there is a greying of the rural bar due to a shortage of new attorneys.

The demographic trend cannot be ignored: 74.3% of respondents in the Albany Law School report were 45 years or older, with 54% at or near retirement age. This means that within 10 to 30 years, the majority of current rural attorneys in New York State will be fully retired.

What will it take to attract young lawyers to rural practice? The NYSBA task force report offers a range of potential solutions including loan forgiveness and repayment assistance programs, law school tuition assistance for those who plan to practice in rural areas, and a reassessment of law school programs to encourage promoting access to justice, providing information to students about rural law practice, and offering direct legal services in impacted areas.

The NYSBA report also calls for an increase in assigned counsel rates, which have not risen in New York since 2004..

Young lawyers who have grown up in a fully connected world are less likely to be willing to settle in communities without fast internet access and dependable cellphone service, so the NYSBA report also calls for better and more widespread broadband service across the state as well as other telecommunications improvements. 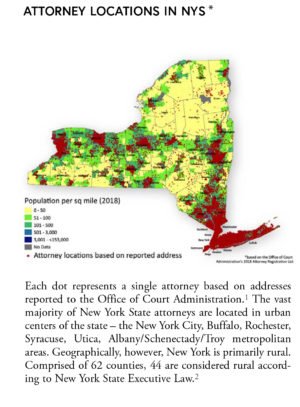 Each dot represents a single attorney based on addresses reported to the Office of Court Administration.[1] The vast majority of New York State attorneys are located in urban centers of the state – the New York City, Buffalo, Rochester, Syracuse, Utica, Albany/Schenectady/Troy metropolitan areas. Geographically, however, New York is primarily rural. Comprised of 62 counties, 44 are considered rural according to New York State Executive Law.[2] 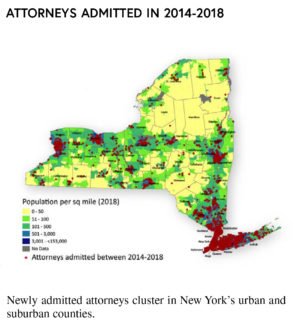 Attorneys Admitted by Year in NYS 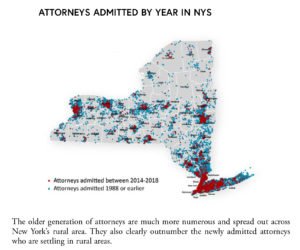 The older generation of attorneys are much more numerous and spread out across New York’s rural area. They also clearly outnumber the newly admitted attorneys who are settling in rural areas.

Residents Per Attorney in NYS 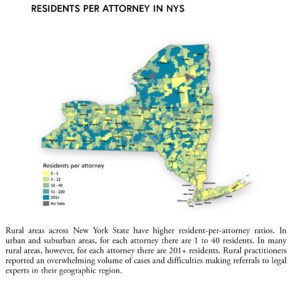 Town and Village Courts in NYS 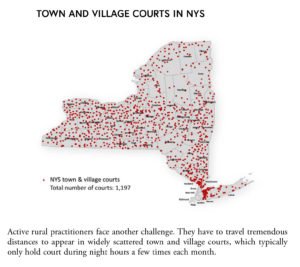 Active rural practitioners face another challenge. They have to travel tremendous distances to appear in widely scattered town and village courts, which typically only hold court during night hours a few times each month.

[1]. The attorney registration list maintained by the Office of Court Administration’s Attorney Registration Unit only publicly releases attorney work addresses, not their home addresses. Accordingly, attorneys who only report a home address, without including a work address, are not projected on this map. Additionally, 4,725 attorneys in suspended status are not shown on this map.