Section status recognizes the critical importance of negotiation, collaboration, mediation, neutral evaluation, arbitration and new and hybrid forms of dispute resolution in all areas of legal practice. The Section is a forum for improving these processes and the understanding of dispute resolution alternatives, for enhancing the proficiency of practitioners and neutrals and increasing the knowledge and availability of party-selected solutions.

The Section will serve this mission by: 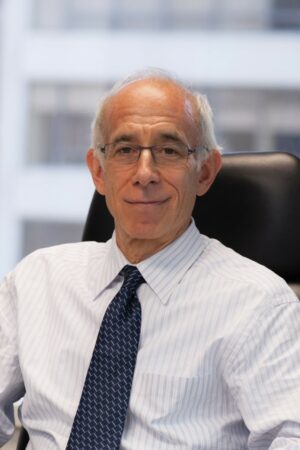 Noah Hanft is the co-founder of Acumen ADR, a dispute prevention and resolution platform. Prior to Acumen ADR, Hanft spent much of his career as the general counsel of MasterCard. Hanft began his career as an attorney with the Legal Aid Society in New York City. He was the recipient of the International Academy of Mediator’s “Award of Excellence.”

Hanft has an LL.M from New York University School of Law in Trade Regulation and a J.D. from Brooklyn Law School.

The New York Dispute Resolution Lawyer encourages article submissions on topics of interest to members of the Section. Writing an article for a NYSBA Section publication is a great way to get your name out in the legal community and advertise your knowledge. Our authors are respected state-wide for their legal expertise in such areas as arbitration, mediation, and collaborative law.

Submit an article for future publication

Letter to COSAC on Proposed Amendments to Rule 8.3
September 2019: This letter provides the Section’s recommendations regarding certain amendments proposed by the NYSBA Committee on Standards of Attorney Conduct (COSAC) to Rule 8.3 of the New York Rules of Professional Conduct. In particular, we recommend that the commentary expressly state that the rule does not affect the obligation of a mediator to maintain the confidentiality of mediation proceedings.

Letter to NYS Courts re: Presumptive ADR Initiative
August 2019: This letter offers the Executive Committee’s considered suggestions and recommendations regarding the New York State Unified Court Systems’ Presumptive ADR Initiative, which was announced on May 14, 2019 by Chief Judge Janet DiFiore and Chief Administrative Judge Lawrence K. Marks. The letter was limited to the implementation of presumptive mediation, and among the subjects we addressed are the need for competent, well trained mediators; informing parties about mediation and other relevant court-annexed mediation programs; the need to ensure that mediators are properly compensated; selection of court-appointed mediators; and collection of data on program outcomes.

Letter to COSAC on Proposed Amendments to Rules 2.4 and 7.2
July 2019: This letter provides the Section’s recommendations regarding certain amendments proposed by the NYSBA Committee on Standards of Attorney Conduct (COSAC) to Rules 2.4 and 7.2 of the New York Rules of Professional Conduct. In particular, we recommend clarifications to the respective commentaries in light of the operation of the mediation privilege and the designation of arbitrators and mediators as experienced in the ADR field by organizations such as the Chartered Institute of Arbitrators, the Center for Effective Dispute Resolution, and the International Mediation Institute.

Report on Pre-Dispute Arbitration of Employment Claims
June 2019: This report describes the characteristics of employment arbitration and the relevant legislation and resolutions, discusses both the advantages and disadvantages of arbitrating employment claims relative to court litigation, and considers ways to resolve or mitigate the concerns that have been raised.

New York Law in International Matters
The increasingly global business community requires accurate and comprehensive information on choice of laws, procedures and legal systems to govern agreements, selection of the best forum in which to resolve their disputes, and the most efficient and equitable means of that dispute resolution. New York, as a global financial and commercial capital, plays a critical role in all these choices.

Report on the Dodd-Frank Act
April 2011, The Section approved comments to be submitted to the Consumer Financial Protection Bureau with respect to the study of arbitration mandated by the Dodd Frank Act. The Section takes no position as to the appropriate treatment of consumer disputes, but strongly supports a thorough examination of dispute resolution processes to ensure that they are in the public interest and fair to consumers. The Section’s comments identify issues that it is urged should be considered by the Bureau in its study.

Final Report on Mediator Quality
May 2010: This report examines the issue of mediator quality/credentialing and makes recommendations for specific action steps for adoption by the Section.

Report on the Arbitration Fairness Act
April 2009: The Dispute Resolution Section of the New York State Bar Association (“the DR Section”) urges Congress to carefully review arbitration bills introduced in Congress to ensure that they do not interfere with general commercial arbitration. This most particularly applies in the international context where arbitration is often the only practicable choice for dispute resolution.

Report on Arbitration Discovery in Domestic Commercial Cases
April 2009: As discovery proceedings have exploded in civil actions in the United States, there has been a trend to inject into arbitration expensive elements that had traditionally been reserved for litigation — interrogatories; requests to admit; dispositive motions; lengthy depositions; and massive requests for documents, including electronic data. This has particularly been the case as the use of arbitration has grown for the largest, most complex commercial cases.

What are DRS Diversity Scholarships?

Who is Eligible for the Scholarships?

Anyone admitted to the bar in New York may apply for the scholarships, although preference will be given to minority and female applicants.
Learn More

The NYSBA Dispute Resolution Section Diversity Committee (the “Diversity Committee”) encourages, fosters and supports the development of diverse talent and inclusion in all types of alternative dispute resolution, including mediation, arbitration, early neutral evaluation, mini trials, etc. both as neutrals and as representatives of parties in the processes. Diversity of those participating in the dispute resolution process enables the presentation of many views and provides a greater perspective on how and in what way to use dispute resolution to resolve problems, leading to more options and fairer results. Encouraging a diverse and inclusive environment also promotes respect and fosters treating individuals of diverse backgrounds fairly.

1. Be a member of a diverse group;
2. Licensed attorney;
3. Experience or Demonstrated Interest in Alternative Dispute Resolution: court annexed programs such as SDNY mediation, Attorney Client Fee program, or with a community mediation program such as Peace Horizons;
4. Membership in NYSBA (non-members must apply for membership within 30 days of approval to the Mentorship Program).

So You Want to Be a Mediator and Arbitrator
A Guide to Starting a New ADR Practice and Giving Your Existing Practice a Boost – for New York State Lawyers. This guide is a perk for members of the Dispute Resolution Section.

An Arbitration Primer for Litigators
This is a manual to aid litigators representing clients in a domestic arbitration in New York.

How to Negotiate with Difficult Parties in Challenging High Stakes Situations (June 30, 2021) 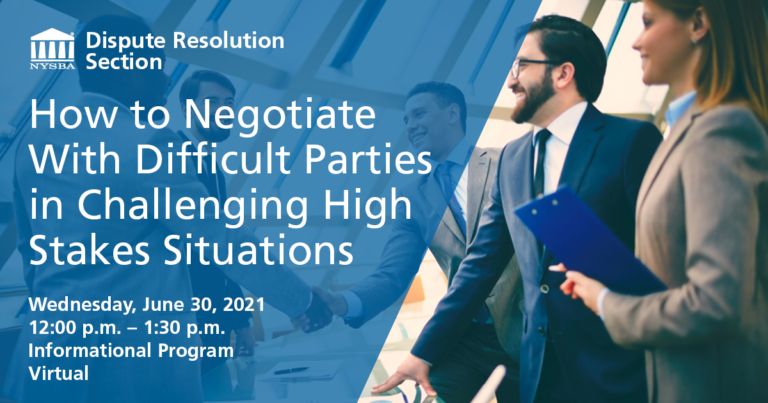 The Habits of Highly Effective Dispute Resolvers (May 26, 2021) 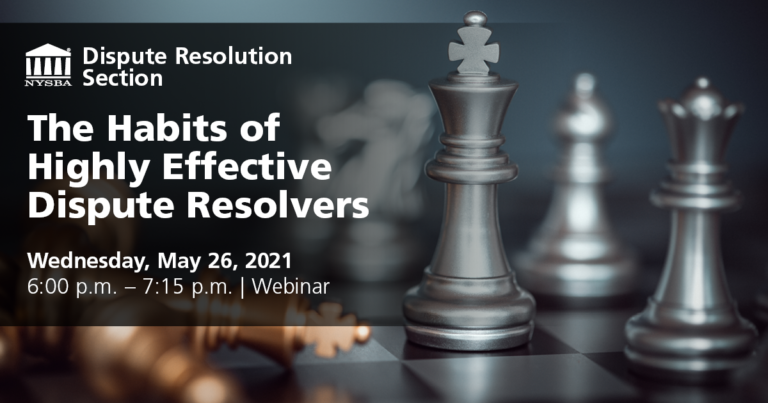 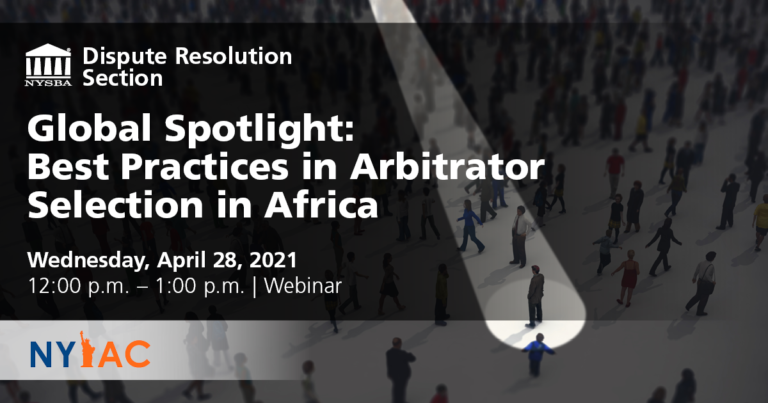 Her Seat at the Table: Women in Negotiation & Self-Advocacy (February 8, 2021) 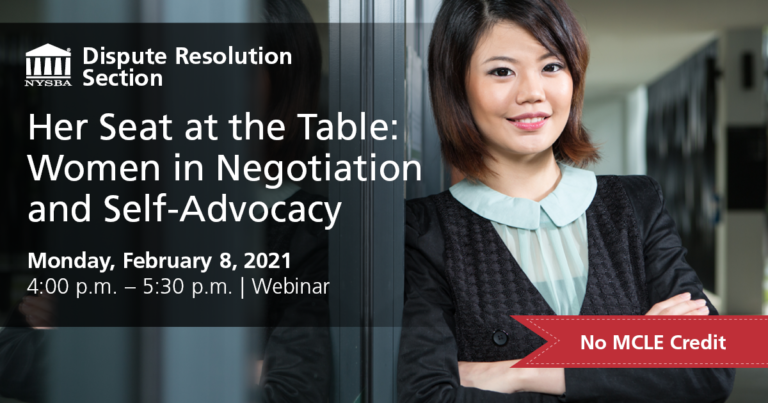 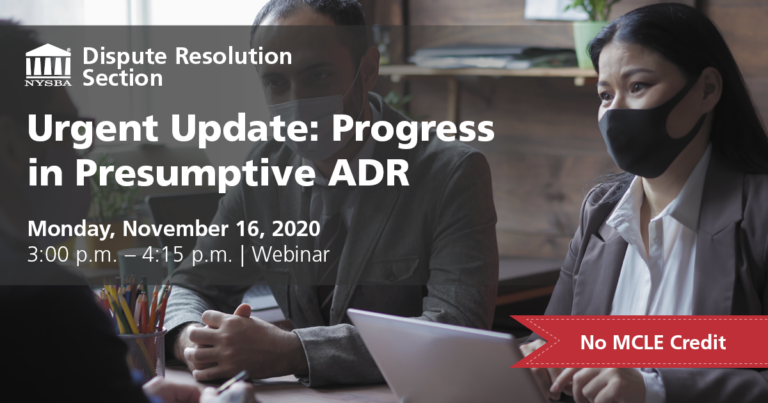 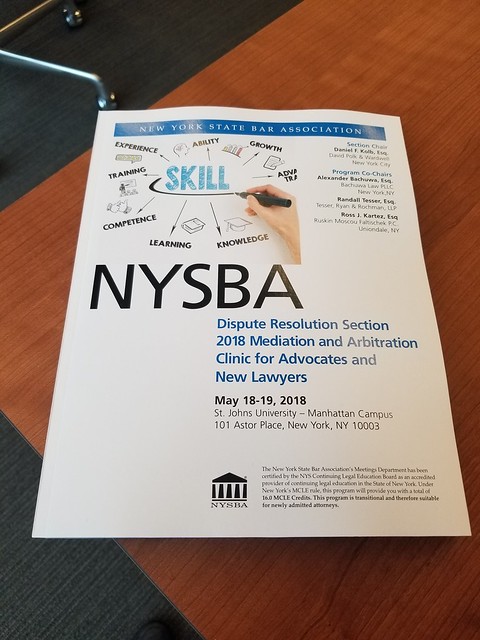 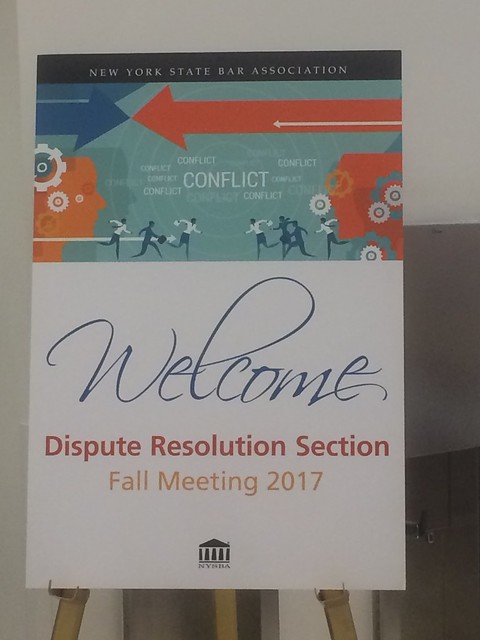 Have questions on becoming a mediator or arbitrator?