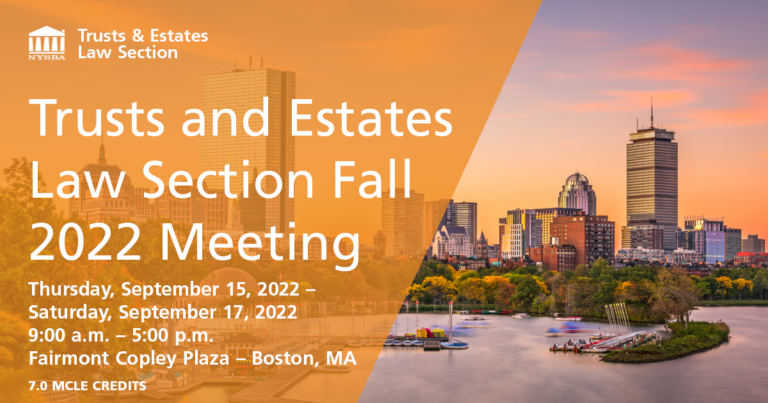 You may live, work, and be licensed to practice law in New York, the “concrete jungle where dreams are made of.” But given that the New York estate practitioner often encounters clients, adversaries, and assets outside of New York, mastering New York law is not enough. This program will explore some fundamental issues that arise when New York estates have foreign components including ancillary proceedings; estate planning for New York clients owning foreign assets and foreign clients owning New York assets; issues related to decanting New York trusts to other jurisdictions; choice of law and jurisdictional issues in wills, trusts and agreements; and the various related ethical issues.

REGISTRATION FOR THIS MEETING IS NOW CLOSED.
IMPORTANT NOTE REGARDING CANCELLATIONS: NO REFUNDS AS OF MONDAY, SEPTEMBER 5. No walk-ins will be accepted at this meeting.

This program is not transitional and does not qualify for newly admitted attorneys.

Please Note: You must be vaccinated for COVID-19 to attend a live NYSBA meeting, program, or event. 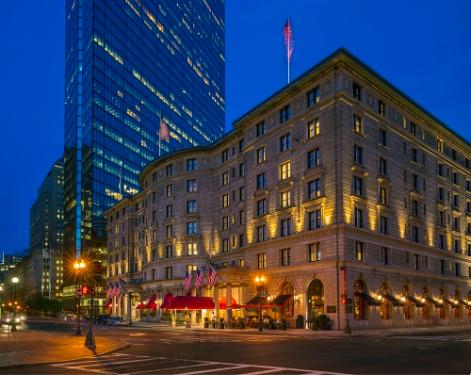 On a Monday morning after a holiday weekend, your inbox is full of client emails. Your long-time New York client wants you to prepare a Florida-based revocable trust. Another wants to informally settle a family dispute in Virginia. Still another is receiving medical treatment in Nevada and wants to immediately execute new estate documents while there. Your last email of the day is a New York beneficiary of a Delaware trust who wants advice regarding the trust’s terms. What are the boundaries of a New York law license when advising on these and similar matters? This program will explore the ethical obligations that confront you in these types of situations.

The Nuts and Bolts of Ancillary Probate and Administration Proceedings

A decedent’s assets located in New York need a New York-appointed fiduciary to dispose of them through an ancillary proceeding. It may be straightforward if a fiduciary were appointed by a foreign jurisdiction, but the process can become more complex if the foreign domicile does not have a formal process. When also considering New York’s eligibility requirements for fiduciaries, potentially different orders of priority for receipt of letters, and notice requirements, these proceedings can become complex. This program will examine the procedures for different types of ancillary proceedings, and identify some of the thorny issues that may arise therein.

A View from the Bench: Jurisdiction and Other Issues Related to Ancillary Proceedings

Venetian Room (around the perimeter)

Who? What? Where? When? and How? – Deciphering Choice of Law, Conflicts of Law, and Jurisdictional Nexus for the T & E Lawyer

Perhaps the most commonly “cut and pasted” (but seldomly appreciated) boiler-plate provisions in wills, trusts, and other related documents concern choice and conflict of law. But when confronted with cross-jurisdictional issues, those rarely analyzed provisions become critical. Sometimes, whether a party wins or loses turns on whether the substantive or procedural law of one jurisdiction or another governs. This program deciphers the import of these provisions.

Frank Sinatra isn’t the only one who wants “to wake up in a city that never sleeps.” Wealthy clients from all over the world own significant real estate and other property interests located in New York. It’s also common for New York clients to have similar interests located outside of New York, be it in another state or another country. This program will explore gift, estate, and income tax issues associated with these scenarios.

Thirty years ago, New York enacted the nation’s first decanting statute. But it wasn’t until its 2011 amendment that its popularity exploded. Along with the increased flexibility afforded by the 2011 amendment, special issues arise when decanting New York trusts to non-New York trusts. This program will identify and discuss issues that pertain to cross-jurisdictional decanting.

Learn about recent updates to New York trusts and estate law, proposed legislation, and issues that Section members are actively working on.

Breakfast with the Surrogates: Issues Related to Joint Accounts

Joint accounts can be convenient, but they are also ripe for litigation. Our panel of surrogates will examine how these accounts are dealt with under the current law, as well as some ideas for future improvements.

Top 10 Things to Do in Boston

Boston offers plenty to keep you entertained. Things that you should definitely do during your stay in Boston are:

1. Walk the Freedom Trail
Boston has huge significance in American history, and the Freedom Trail is a path that leads through downtown Boston and passes 16 of the city’s most significant historical sites. Included amongst them are the Old State House, from whose balcony the Declaration of Independence was proclaimed in 1776, the Granary Burying Ground where many notable Revolutionary War patriots were laid to rest, and finally, the Bunker Hill Monument, a granite obelisk that was built to commemorate the Battle of Bunker Hill. Walking the trail (2.5 miles in length) will give you a great insight into the history not only of Boston itself, but also into the foundation of the United States of America as it is today.

2. Visit Harvard and MIT
Boston is well-known worldwide for its academia, in particular for being home to the prestigious universities of Harvard and MIT (Massachusetts Institute of Technology). Harvard is not only one of the world’s best universities, but also one of the oldest, and a trip out to Cambridge to see its 210-acre campus is well worth the effort. To walk takes over an hour, but the subway will get you there in 15 minutes, so unless you have very comfortable shoes, this is probably a better option! Although a more modern establishment, MIT also has a fantastic reputation worldwide. MIT buildings are scattered along Massachusetts Avenue, which leads out to Harvard, so can easily be visited in the same trip.

3. Have Fun on The North End Market Tour
Discover Boston’s Italian neighborhood, the North End and its fine food establishments. This three-hour tour is Michele or one of her personally trained guides. Follow the cobblestone streets and discover small markets that supply ingredients for the enticing menus on Hanover Street. Michele will offer a history of the North End before delving into different stores and pointing out food products and ingredients that are staples of authentic Italian cuisine. And yes, there are free samples.

4. Take A Stroll Through Boston Common and Boston Public Garden
As the starting point for the Freedom Trail, you will be guaranteed a glimpse of Boston’s attractive Common, but just next door is the beautiful Public Garden, which is well worth a visit in its own right. Aside from the historic monuments and statues, and the botanical park, there is also the famous lagoon with its swan boats. Even if you don’t want a ride on them, just sitting by the side taking in the views will keep you entertained. The park is particularly nice in the autumn as the leaves turn a mix of vibrant red and orange.

5. Spend an Evening in One of Boston’s Irish Bars
Boston is home to a huge number of Irish people, and people with Irish heritage, and there remains today a massive about the number of Irish bars in and around the city. An evening in an Irish bar might not teach you an awful lot about the history of immigration, but you’ll be assured a really fun evening and some good ‘craic’ as the Irish would say!

7. Visit the New England Aquarium
Another of Boston’s top attractions, the Boston Aquarium is located on the city’s waterfront, and is credited with revolutionizing the modern aquarium experience for visitors through its emphasis on a more natural setting for aquatic life. Visitors can see sharks, turtles, stingrays, penguins and even a Giant Pacific Octopus.

8. Take A Ferry to The Boston Harbor Islands
Want to swim, hike, explore the ruins of an old fort and camp out under the stars at a national park? Believe it or not, you can do all of these things without leaving the city of Boston. The Boston Harbor Islands National Recreation Area consists of 34 narrow isles scattered in New England’s most historic harbor, and you can visit these “hidden” outdoor spaces by boarding seasonal ferries from Boston’s Long Wharf.

9. Have Some Beer on the Brewery Tour
Experience the art and mystery of brewing at the Sam Adams Brewery. Taste the rich malts and spicy hops, the classic ingredients of beer. Tour the Boston Beer Museum and learn about Boston’s proud brewing past. And taste the history-the classic, award-winning beers of Samuel Adams. Besides the Sam Adams Brewery, the Harpoon Brewery offer tasting of best beers New England can produce. The tasting is free and lasts about one hour.

10. Take A Day Trip to Salem
Whilst there’s plenty to keep you entertained in Boston itself, if you fancy getting out of the city for a day one good option is a trip out to the town of Salem. Only half an hour or so by train from Boston, Salem was one of the most significant seaports in early America but is better known for being the location of the infamous Witch Trials of 1962.

Recommended restaurants during your stay in Boston: