Election Subversion – A Real Threat to Our Democracy: What Lawyers Can Do

This year’s esteemed panel of Jerry Goldfeder (Moderator, Stroock LLP; Director, Fordham Law School Voting Rights and Democracy Program), Terry A.O. Minnis (Panelist, Asian Americans Advancing Justice), and Amia Trigg (Panelist, NAACP Legal Defense Fund), will explore the spate of laws by various states that threaten to undermine the integrity of our elections – and what lawyers can do to preserve our constitutional democracy.

The Commercial & Federal Litigation Section of the New York State Bar Association will be bestowing The Honorable George Bundy Smith Pioneer Award (the “Pioneer Award”) to Congresswoman Plaskett. The Pioneer Award is presented annually by the Section to an attorney or jurist of color whose career accomplishments exemplify the high standards set by the Honorable George Bundy Smith, the late judge of the New York State Court of Appeals. The award, which celebrates the hallmarks of Judge Smith’s career — legal excellence, community commitment and mentoring — was established in 2007 in recognition of his work as a Freedom Rider during the Civil Rights Movement, and his unwavering commitment to social justice during his 30 years of public service as a judge. 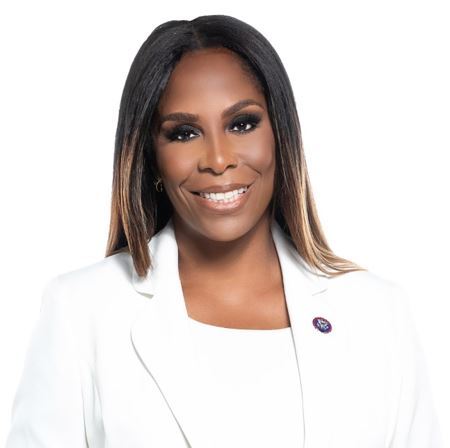 Congresswoman Plaskett is a true pioneer in every sense of the word. She represents the United States Virgin Islands’ at-large Congressional District in the United States House of Representatives, and is currently serving her fourth term in Congress. In true historic fashion, Mrs. Plaskett is the first Member from a U.S. territory and the fourth African-American woman to serve on the House Committee on Ways and Means, the oldest and one of the most exclusive committees in Congress. Congresswoman Plaskett has a long history of public service, having started as an Assistant District Attorney in the Bronx DA’s office as well as having worked as a political appointee at the Department of Justice where she served as Senior Counsel under both Deputy Attorney General Larry Thompson and his successor James Comey.

Thank you to our Co-sponsor!

Remarks Regarding The Hon. George Bundy Smith and Introduction of Justice Dena Douglas - 6:07 to 6:12 p.m.